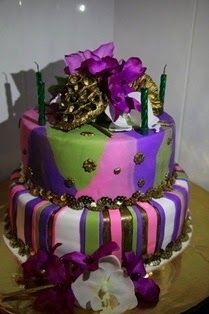 So this past weekend was my mum's 50th birthday celebrations. She had a grand party in her home with half a million people (okay, so a little over half a hundred) and awesome food. The theme for the party was 'exotic', so people dressed up in togas and saris and all sorts of pretty clothes, and we ate Turkish gozleme and Indian curries (authentic!) and baklava and Turkish apricot cake and REALLY YUMMY STUFF. And of course, we'll be eating it for the next month.

I had the job of designing and making the birthday cake. Mum is a fan of white chocolate and raspberry, so that was a starting point, and I really wanted to try dark chocolate and lavender, just because it sounded fun. Raspberries somehow ended up becoming blackberries - I forget how, but Mum and her husband had picked blackberries earlier in the year and frozen them, so it was cool to use those anyway. And I convinced her in the end to let me use lavender, bwa ha ha, and it came from my garden :o) 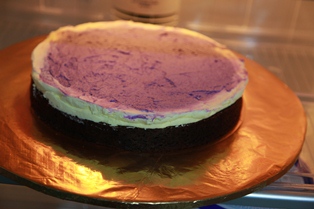 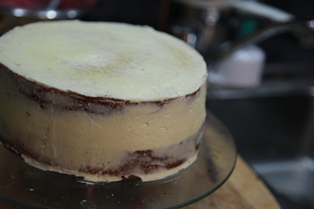 As for the exotic theme, the colour scheme was green, pink and purple. After speaking to the lady in the cake shop I decided to buy pre-coloured pink fondant, but I'm kind of sorry I did - the pink wasn't hot pink as advertised, but more of a bright candy/Barbie pink.

I decided to marble the icing, but on reflection I thought two layers of marbling might be too much. We browsed through pictures and decided on stripes: 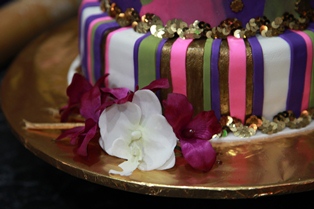 I layered the cake up, stuck on the gold flowers, and decided it needed a topper - so off I went with the Middle Sisterous One to shop for silk flowers. We determined while at the craft store that buying gold braid would be quicker and easier than making a gold rope out of fondant to go around the bottom of each layer, but the store didn't have anything decent in proper gold. Then I found sequins B-) It was an exotic cake, after all.


And it looked gorgeously rainbow cut up and served :D 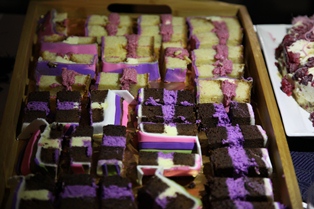 Here at Heart of the Homes, we believe that the kitchen embodies the spirit of a home. We also believe in the importance of eating fresh, eating seasonal - and having fun the whole time!

We also cook a lot by look/feel/taste rather than by measurements - so most of our recipes are a tad imprecise. We think this is in keeping with the spirit of eating fresh, where you have to learn to improvise to work with what's available at the time :)

Cooking on both sides of the Atlantic can make things confusing sometimes. Here are some handy tips for translating our recipes:

And for handy reference, 1 stick of butter = about 125g. Aussie butter is sold in sticks, too, but our sticks are twice the size of a US stick, and you can also buy blocks which are the equivalent of four sticks.